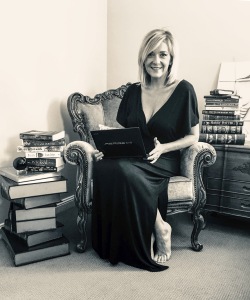 I wasn’t born with a book in my hand, my school reports always had the words ‘focus’ and ‘potential’ in them (usually the first was needed to achieve the second), and growing up in the Australian ‘burbs’ leaves me with a clear image of a wiry blonde girl with dirt on her knee and both hands firmly gripping the handle bars of her BMX bike.

“Glenda’s Unicorn” was the first story I wrote, I was 9 and still have it – typed out on my grandmother’s vintage typewriter, I think it was Olivetti. It was the tale of a young girl shipwrecked on a secluded tropical island who befriends a flying unicorn. I still love it today, as do my two young daughters. Ah unicorns, what better daydream was there for a girl with her ‘head in the clouds’? It’s my father I have to thank for that incredible imagination, vivid – like the smell of oil paints and his colourful scattered canvases.

In April of 2009, from it’s humble beginnings as a tale of a vampire and her keeper conversing in a field situated not far from Jindabyne in NSW, Mabon evolved into a love story between Lucy, a girl with strong female leads in her family and an ‘iffy’ ancestry line, and the gorgeous Gil, who has a habit of questionable timing. The 553 page manuscript had been finished by the birth of my second child, and assessed by         Cathie Tasker in December of 2012.

‘Mabon’ is my debut. It is the first of The Clandestine Chronicles with ‘Yule’, ‘Ostara’ and ‘Litha’ to follow.

‘Mabon’ was selected by Aurora House Publishing and released in Sept 2018 – much to my joy!